On 19 July 2014 about 500 activists joined a humanitarian convoy from Cairo to Gaza in order to deliver solidarity and medical aid. The People’s Convoy was organized by various political groups and independent activists including 6 of April, Revolutionary Socialists, Strong Egypt Party, Dostor Party, students from several universities, and a few workers from Petro Trade, the Public Transport Authority, the National Electric Company, and the Flex Plastic factory.

Activists gathered at 4am in front of the Journalists’ Union building in Cairo with 11 buses and a medical aid truck, hoping to reach Gaza, despite the many challenges set in their way. The convoy had prepared all the necessary permits for the medical aid to travel to Gaza; however, many expected that Egyptian authorities wouldn’t allow it to pass given that they have kept the Rafah border closed amidst the humanitarian crisis and massacres happening in Gaza for over a week.

Surprisingly, once buses reached Ismalia, East of Suez Canal, the police escorted the convoy and sped-up the process of crossing the Suez Canal by allowing the 11 buses to go ahead of the long line of cars and trucks without being searched or National IDs checked. This made most people on the convoy very astonished and suspicious of motives behind authorities making it so smooth to pass at a place many expected would be the furthest the convoy would ever reach.

Soon enough, the convoy reached Balouza check point in North Sinai. After waiting for more than one hour for authorities to give permission to pass, the convoy was told by army officer, “for your safety and with orders from the security intelligence, you must turn around and leave, you are not allowed to pass this point.” The convoy was about 15okm from the Rafah Border and the medical aid was also prevented from passing.

As a result the 500 people on the convoy blocked the road and protested chanting against the siege denouncing the Egyptian regime headed by Sisi for being complicit and part of the blockade on Gaza. Chants for Palestine against Zionist Israel were repeated loudly in the faces of the army soldiers accusing them of being the “army of Camp David and the army aiding Zionist Israel against Palestinians.”

After close to 4 hours at the Balouza check point with many activists determined to pass through, it was clear that the army will soon enough use force against protesters if they didn’t leave and threatening to confiscate the truck full of medical aid. As a result around 4pm, the convoy started heading back towards Cairo after a brief press conference was held in order to brief the media on the situation denouncing the Egyptian army for being the number one supporter of Israel by blocking the convoy and continuing the siege on Gaza.

Activists reassured the press that this will not be the last convoy organized with the aim of extending solidarity to the Palestinians. They pledged to organize more actions in solidarity with the whole Palestinian resistance, mobilising whatever support the Egyptian opposition could offer them, starting with fighting the very same regime enabling the siege on Gaza.

We are again reminded that the road to a free Palestine starts with the removal of Arab dictatorships. In Egypt this means that every step forward in the continuation of the Egyptian revolution is a step forward towards the freedom of Palestine. 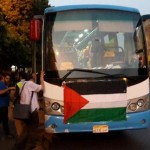 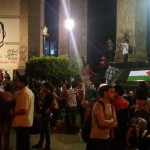 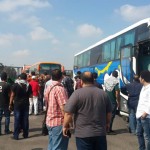 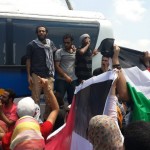 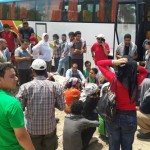 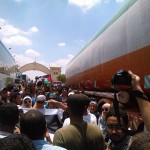 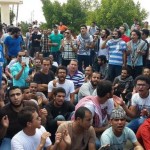 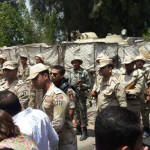 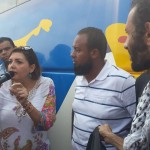